As a continuation for Demystifying Named Entity Recognition - Part I, in this post I’ll discuss popular models available in the field and try to cover:

Over the history of NER, there’s been three major approaches: grammar-based, dictionary-based and machine-learning-based. Grammar-based approach produces a set of empirical rules hand-crafted by experienced computational linguists, usually takes months of work. Dictionary-based approach basically organizes all the known entities into a lookup table, which can be used to detect whether a candidate belongs to a defined category or not. By design it doesn’t work well with newly invented entities. Machine-learning-based approach typically needs annotated data, but doesn’t necessarily rely on domain experts to come up with rules or fail on unseen entities.

We’ve covered the details of MEMM in the previous post. The key idea of the MEME approach is to model the conditional probability of tag sequenece for a given sentence with Markov assumption:

We then model using local environment:

In inference, we use Viterbi algorithm to get best-fitting tag sequence for a given sentence. Details can be found in 2.2.1 section of the previous post.

In training, we use maximum likelihood estimation to get optimal that

where are the sentence and corresponding tag sequence (the whole training dataset has examples).

The main challenge in direct modeling is that the denominator is sum of terms where is the number of tag label types and is the length of sentence to tag. This is a much larger number than that in MEMM - has just terms in the denominator.

If using brutal force, we have to evaluate for times.

Fortunately, if we add a little structure into , which I’m going to talk about next, we can bring the exponential complexity - down to linear complexity - .

The structure added in CRF is:

To maximize , we define a partial score as we did in 2.2.1 section of the previous post:

If we can maximize any partial score (which turns out not that difficult), then the score we want to acutally maximize, , is just a special case of when .

So how to maximize any partial score? Let’s start with , namely .

This is easy because it’s just a single-variable optimization and can only have K choices. We also store all the evaluated .

How about , namely maximize ?

We can first fix and optimize over dimension. Remember we’ve known evaluated from the previous question. So it takes computations to find the optimal for each - . Then pick the which has maximum . In total, we need perform evaluations. We also store all the for future use.

How about , namely maximize ?

Similar to the previous question, we try to estimate for each using . We also carry out evaluation per , thus totally evaluations for all possible . We store for future use (e.g., when ).

By doing this all the way to , we can get with roughly evaluations.

Similar to MEMM, we can also use maximum likelihood estimation to get optimal that

where are the sentence and corresponding tag sequence (the whole training dataset has examples). More details on training algorithm can be found in Page 10 of Michael Collins’s CRF note.

In the setting of LSTM, each token is fed to a LSTM unit, which outputs a . models log probabilities of all possible tags at i-th position, so it has dimension of .

The inference in LSTM is very simple: = the tag with highest log probability at i-th position.

Like all the other neural network training, LSTM training uses Stochastic Gradient Descent algorithm. Loss function adopts negative log likelihood. For a data point , we have its loss calculated as:

Total loss is the mean of all the individual losses.

where is the total number of training examples.

BiLSTM stands for bi-directional LSTM, which provides sequence information from both directions. Because of that, BiLSTM is more powerful than LSTM. Except the bi-directional component, the meaning of network output, inference, and training loss are same as LSTM.

BiLSTM captures contextual information around i-th position. But at each position, BiLSTM predicts tags basically in an independent fashion. There’s cases where some adjacent positions are predicted with tags which do not usually appear together in reality. For example, I-PER tag should not follow B-ORG. To account for this kind of interactions between adjacent tags, Conditional Random Field (CRF) is introduced to BiLSTM. 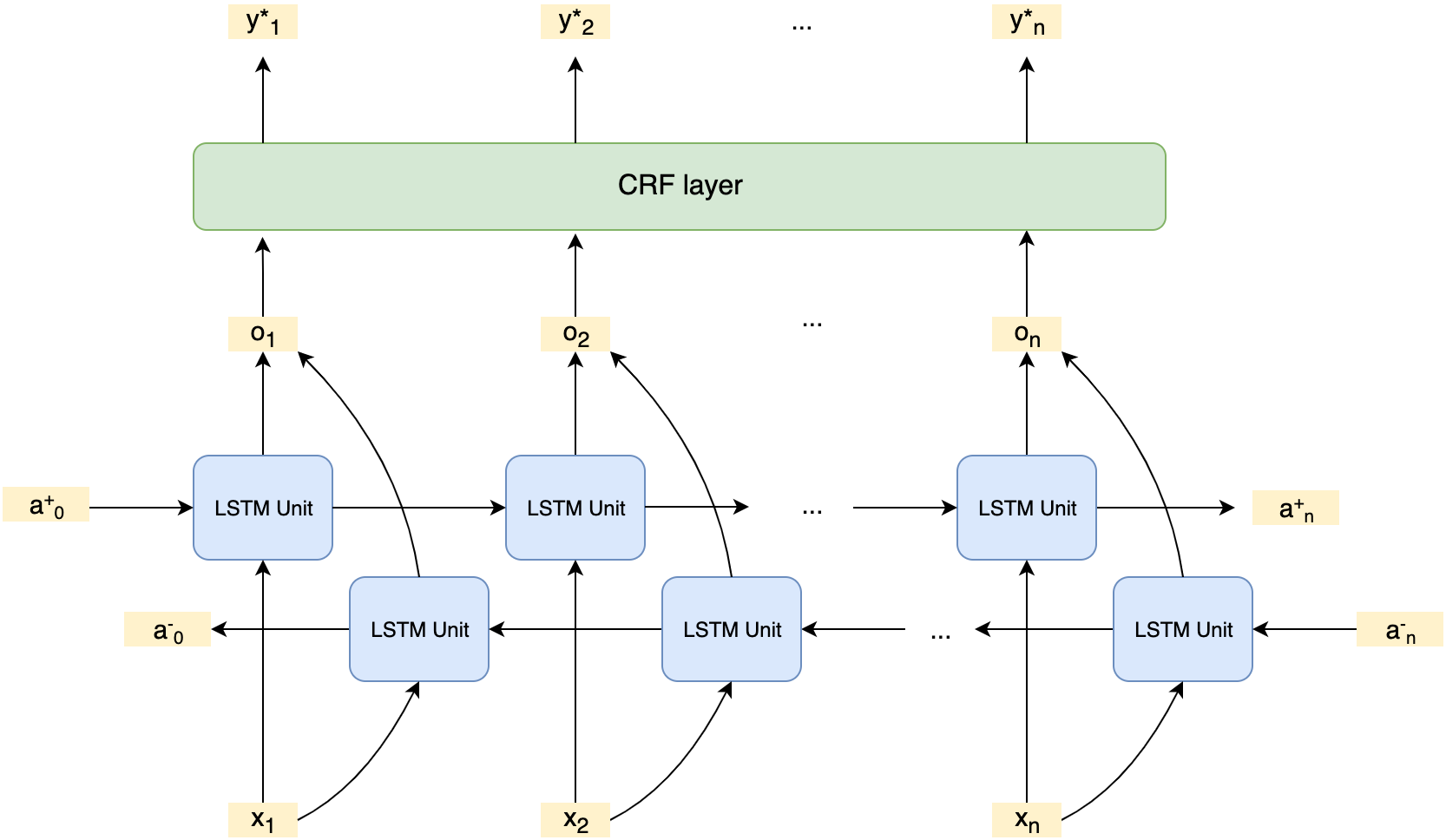 where models emission scores of all possible tags at i-th position and is the best tag for i-th position which collectively achieves highest sequence score.

Same as the inference in CRF section, given a trained network and sentence , any sequence will have a score.

The score is a sum of contributions from token level. i-th position has contribution of , where the first term is emission score and second term is transition score.

To find the tag sequence achieving highest score, we need to use dynamic programming.

Define sub problem to be the max score accumulated from 1st position to -th position with the -th position tag being , detailed as follows:

The recursion would be:

The original problem is then

We can always use parent pointers to retrieve the corresponding best sequence .

Loss function for BiLSTM-CRF also adopts negative log likelihood. For a data point , we have its loss calculated as:

where the first term is easy to calculate via a forward pass of the network and the second term needs more care. Let’s define that term (without log) as , which is exponential sum of scores of all the possible sequences of length .

To calculate , we need to use dynamic programming again. This time the sub-problem is the exponential sum of scores of all possible sequences of length with last tag :

The recursion would be:

The original problem is then

Recent research on BERT provides an option for NER modeling. Despite of the complexity of the BERT model architecture, in the context of NER it can be regarded as an advanced version of our BiLSTM model - replacing the LSTM with multiple Transformer Encoder layers. 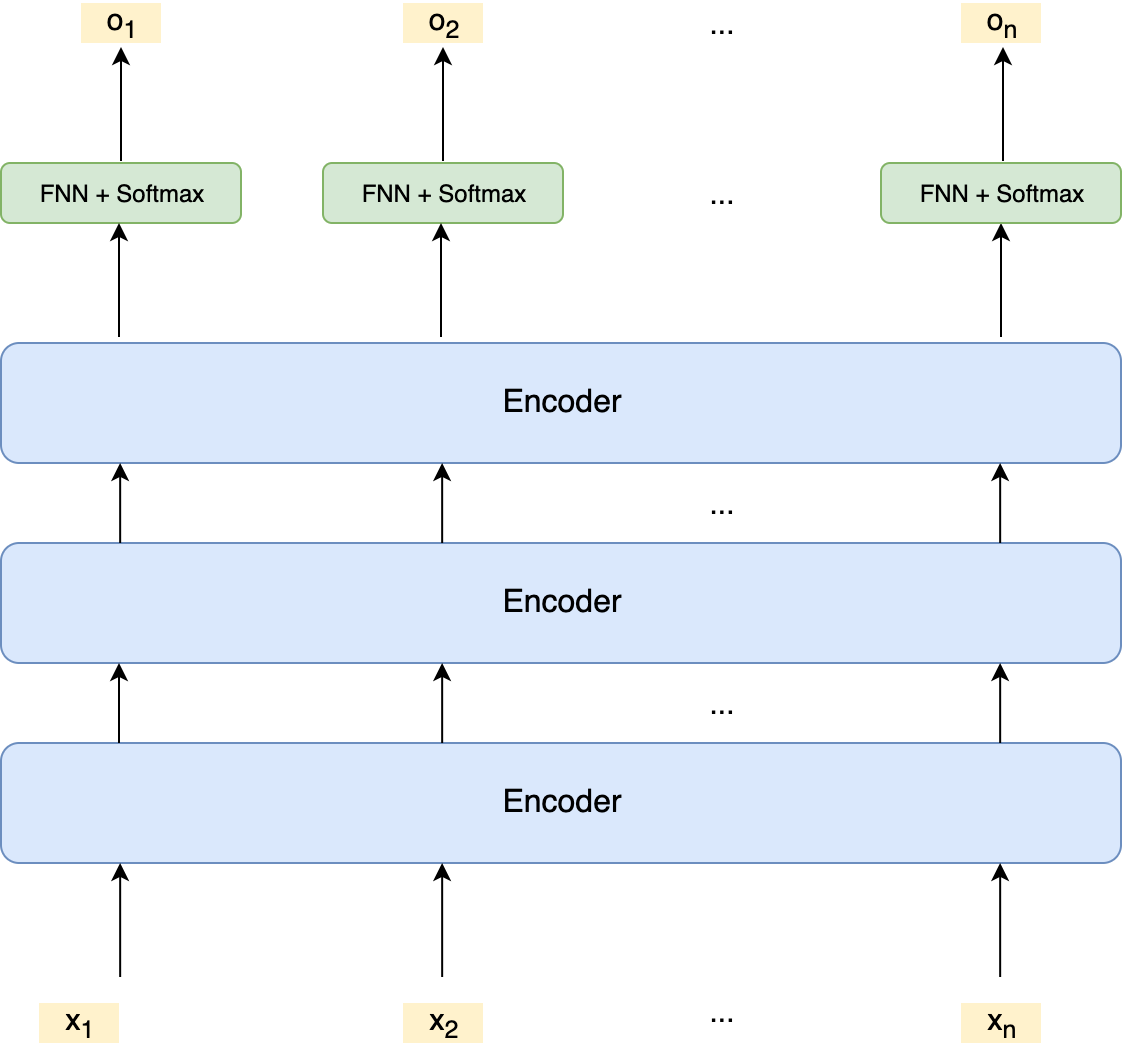 Inference, and training loss are same as LSTM section.

There’s several machine learning based NER repositories in GitHub. I picked some of them here with some comments.